Where To Have A Heart Attack    Random things learned while attending a CPR-AED recertification class.... It's  that time of the year again for me - recert time.  Like many other health professionals, in order for exercise physiologists/personal trainers to maintain their active certifications, we need to keep our CPR-AED certificates current.

So I found myself in a classroom full of peppy UC Berkeley students, along with a few local teachers, spending our Sunday afternoon pumping and puffing away during the Warriors playoff game.

Fortunately, one usually learns a nugget or two of valuable information that makes it more meaningful.  For example - Is there a best place to have a heart attack??

Yes, actually - hands down - its a Las Vegas casino.  Security teams who are generally the first responders, grab an AED on their way, and communicate with EMTs who are positioned strategically along the Strip.

My spouse has first hand knowledge of this.  The elderly, overweight gentleman next to him, hit a Royal Flush. (This is the big prize in video poker.)  Next thing my husband knew, he was guiding the man down to the floor.  This was followed by security with the AED.  Repositioning the airway, brought the fellow back to consciousness....but sitting him up, he passed out again.  This time, the AED determined an abnormal heart rhythm and the ambulance was ordered.

Second best place?  According to TJ, a former EMT, who taught our class, its a cruise ship, due to the proximity of staff and the short distance to get to emergency equipment.

Other gems:  to get the right rhythm for chest compressions, sing along to "Staying Alive" or the "Imperial March" from Star Wars.  The latest protocol is 30 chest compressions to 2 quick breaths.  A household cutting board can be used as an emergency back board, if a firm surface is not available.  All choking victims should be checked out at a hospital, even if they seem fine. There could be invisible internal damage.

MORE FROM ORLANDO  From ACSM's Health & Fitness Congress in Orlando, that I attended in April:

Myths in the media regarding nutrition.  This session looked at a few of the commonly held beliefs that may be perpetuated by a steady diet of television. 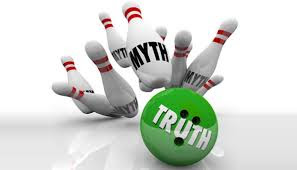 The first was different protocols for fasting.  Fasting used to be recommended so patients would know what hunger really felt like.  Then fasting became popular to help with weight loss and help with insulin levels.  The research data is scanty with few human studies, while the media messages are mixed with too many rules.  In reality, fasting protocols may not be practical for very many people.

The benefits of eating breakfast has been confirmed, however. Those with healthier diets eat less breakfast, and the resulting diets have less cholesterol, fat, and more fiber.  Skipping breakfast usually means less calcium fiber, vitamin D and other vitamins & minerals being omitted from the diet.  Breakfasts contribute less than 20% of daily calories, but may contain more than 25% of key vitamins & minerals. 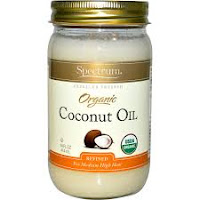 Coconut oil is very much a hot topic right now.  Its mostly saturated fat, whose use was a big No No not too long ago. Currently its a rage whose benefits include reducing cancer, heart disease, colds, but in reality there are not very many studies. Bottom line is that its a fat, albeit one with a higher smoke point, and containing boric acid which is a mild antiseptic.

How about protein?  While 10-35% protein (of total calories) meets the needs of most people, in reality many popular diets are pushing much higher levels.   Its required for muscle repair, the immune system, and hormone production, in particular satiety hormones.  Studies have shown that more protein at breakfast results in less total caloric consumption throughout the day.

An optimum intake of protein is 25-30% and it is not stored - any excess is excreted. So, more protein is not better.  Protein synthesis & satiety are not improved with more protein.

Inflammation - it seems like a daily occurrence that a link between inflammation and a chronic disease is confirmed. Heart disease, stroke, Alzheimer's, stroke & cancer all have inflammatory components. 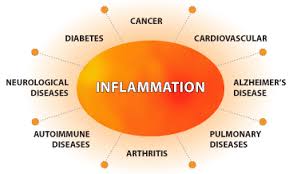 What exactly is inflammation? Inflammation is the body's natural response to injury & outside irritants.  It can be acute with a simple cut, or it can be chronic, where the assault on the body is continuous.  In the latter case, the body response can cascade out of control, and contribute to the risk of disease. Chronic inflammation can damage heart valves, brain cells, trigger strokes, encourage insulin resistance, and cancer.

Research has focused on how abdominal fat plus an unhealthy diet might result in inflammation.  Foods that are high in saturated fat such as red meat, can contribute to inflammation. On the flip side, dietary components such as fiber from whole grains, healthy fats such as olive oil or avocado and dairy foods might reduce inflammation.  Other foods with anti inflammatory properties include seafood, orange juice, berries, grapes, nuts and green tea. 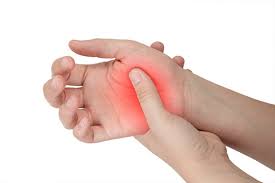 Other facts:  there is a link between obesity and inflammation. Obesity can trigger inflammation in the brain, liver and pancreas and other organs.  This in turn can increase the risk of insulin resistance and type 2 diabetes.

Is inflammation painful?  An acute injury can be red and swollen;  it can lead to exhaustion & fever.  In chronic conditions there might be joint inflammation as in rheumatoid arthritis or psoriatic arthritis.  Low grade inflammation might not cause pain or physical systems, becoming a "silent killer" like high blood pressure.

Can inflammation be cured?  inflammation cannot be cured but can be improved by treating its underlying causes such as allergens or stopping smoking and reducing stress.  For acute stress, over the counter NSAIDS such as ibuprofen or naproxen can be effective.  Healthier health habits can help in type 2 diabetes and heart disease.    Reference 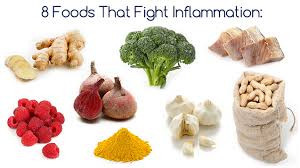 More On Foods For Inflammation:  Many foods have been reported benefits, such as berries, cherries, dark chocolate, garlic, seafood, soy, flax, orange juice, grapes, wine and tea.  Fruits & vegetables  as well as components of the Mediterranean Diet - olive oil & nuts - have also been linked to a reduction of  C-reactive protein (CRP), which is a marker for heart disease.  One study showed that tart cherry juice reduced CRP, making it a possible heart healthy food.

Should we all restructure our diets to include these foods? While these foods are healthy, it has not been proved that inflammation is causative for chronic disease.  Consuming such foods by themselves, does not account for the fact that we also consume many "pro inflammatory" foods such as trans fats, beef & sugar, in a normal diet.

Bottom line:  the main value of these foods is as part of a healthy diet that might control obesity, which can result in an accumulation of abdominal fat, and resulting inflammatory markers such as CRP.

Breaking Headline  Read about the struggles of the "Biggest Loser" contestants to keep the weight off.  New study results explain why.  NYTimes article.  But like all good research, there are more questions than answers here. 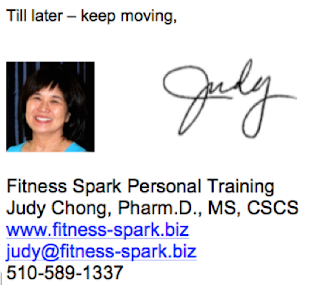 ©Fitness Spark Personal Training, May 2016
Posted by TrnrMom at 4:54 PM